Where History And Heart Abide
by David McGee 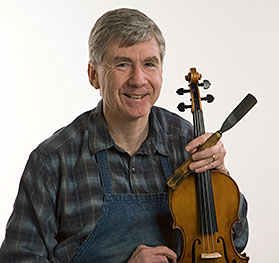 'I came to realize that by crafting violins I had learned to give voice to a part of myself for which I had no language, no voice.' --Bob Childs 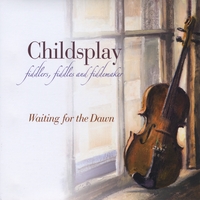 Spirited, ruminative, daring, challenging, beautiful--all these adjectives and more apply to the exhilarating new album from Childsplay. More to the point, history resonates, history both American and, deeply personal. It begins on foreign shores--in Cape Bretton, in Ireland, in Scotland, in Holland--and is filtered through the artists' American experience to arrive as something both redolent with qualities endemic to its source and robust with the spirit of our land. Listen to Childsplay's alternately exuberant and introspective fiddle-rich excursions without the aid of the liner notes, only your imagination, and it will conjur visions of the Appalachians' grandeur, of the rich, fruited plains beyond, and of the beckoning wide open spaces of the west, where lies a blank slate upon which to build a new world, a new national character.

Childsplay is an unusual proposition. Its founder, Bob Childs, has been building custom violins for 35 years; the fiddle players who assemble periodically to form Childsplay come from Europe and America, and play Childs's handcrafted instruments, as they do on this, the group's fifth album since its 1986 debut. Childs's own liner notes, however, reveal the deeper purpose of this exercise. A child of foster homes, he recounts a dream he had in his 30s, after completing his luthier training and opening his own shop: "I am trying to enter a country in Europe. Border guards tell me that I must stop at the customs house. Once inside, I am led through a series of rooms and I come to one that is totally dark except for a single light shining on a table. The guard points to a violin lying on the table and motions for me to pick it up. I do as I'm asked, and when I turn the violin over, I see, inlaid in its back, an image of a small boy, crying." 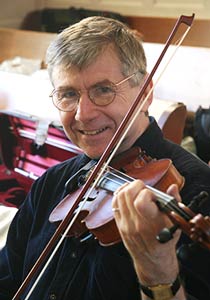 Childs adds: "It is often said that when played soulfully, the violin, of all musical instruments, sounds the most like the human voice. Through my dreams, I came to realize that by crafting violins I had learned to give voice to a part of myself for which I had no language, no voice."

Waiting for Dawn, then, which is the first Childsplay album to feature vocals--in the form of the haunting, whispered musings of Crooked Still's Aoife O'Donovan--is seen by Childs not only as the maturing of the Childsplay sound, but also as evidence of "my own developing capacity for expression."

This iteration of Childsplay lists no less than 21 participating musicians, most playing fiddles, but also viola, cello, bass, flute, accordion, guitar, banjo, piano, and harp (in addition to O'Donovan's vocals and three harmony vocalists, two of whom are also among the instrumenalists). But even as Bob Childs is no mere luthier and Childsplay no mere academic inquiry into the relationship between violin and voice, so are the musicians engaged in a defining mission of their own. As Hanneke Cassel writes in her liner notes, "Childsplay is about community. It's about the art that is created when people from all different musical and social backgrounds come together and spend time getting to know each other." She goes on to recount not only the bonding arising from hours spent in rehearsal, but from communal living, in effect--eating meals together, debating the issues of the day together, laughing at each other's jokes, retreating "into another world" to become "one CRAZY-LY joyful voice."

So it is. The baker's dozen tunes form a patchwork quilt of roots music emanating from Ireland, Cape Bretton, Scotland and the States, sometimes all at once when tunes of disparate cultures are joined together in a seamless medley. So Cape Bretton piano legend Maybelle Chisholm's sturdy, march-like "Compliments to Cameron Chisholm" segues neatly into the driving, jittery album title track penned by Hanneke Cassel, its multiple violins rising and falling in an exuberant, breathless chase that slows down--figuratively speaking--only briefly for a flittering flute solo courtesy Shannon Heaton. Or consider "SamSam Samidon/Good Morning To Your Nightcap," breaking out of the gate with "SamSam" composer Keith Murphy's insistent, sprinting piano chording ahead of the fiddles' soaring, dramatic strains and Heaton's whistle darts hummingbird-like above it all before Murphy restates the opening theme, Heaton's whistle engages him in a strutting dialogue and they're into the celebratory workout that is "Good Morning To Your Nightcap," a traditional tune some 80 years old.

True to the communal nature of Childsplay, as Cassel describes it, O'Donovan's voice adds telling context to the collective's statement, by the simple act of verbalizing the intensely personal feelings the music evokes. They take U2's "Mothers of the Disappeared," a song composed in response to the Argentine Guerra Sucia (Dirty War), the reign of state-sponsored terrorism carried out against the country's citizens between 1976 and 1983 in which thousands of ordinary citizens were "disappeared," and pair it with Cassel's poignant "The Evenstar" to create a mournful, but nonetheless hopeful, hymn that O'Donovan handles with affecting tenderness, sometimes singing softly over a single fiddle and lone acoustic guitar before multiple fiddles raise plaintive voices in support. The theme of social justice is enhanced a few songs later when the group reprises Steve Earle's "Christmas in Washington," a song as timely and provocative now, when the Republican party is doing its best to be an obstacle to recovery as it was in 1998 when a Democratic President found his agenda mired in the quicksand of partisan obstruction. Childsplay keeps the fireworks at bay here, backing O'Donovan's emotional but subdued reading with Lisa Schneckenburger's harmony vocal, Steve Hickman's lonesome fiddle and John Gawler's rustic wooden banjo--an impressively restrained and moving performance, arguably the most powerful on the record. For a group of musicians who roamed far from their homes to help realize this project, the jubilant rendition of "Sweet Sunny South" and O'Donovan's matter-of-fact approach to the lyrics' remembrance of old friends and familiar places in the heart achieves a singular, piercing quality, tears amidst the reverie. And what a brilliant stroke to close with a haunting, pop-styled rendition of "Love Me Tender," O'Donovan caressing the lyrics with heart-tugging feeling as Molly Gawler shadows her in harmony, and the strings, in an arrangement as lush as it is tastefully deployed for heightened emotional subtext--Nelson Riddle could hardly have done better--add a patina of grandeur the performance deserves. Here, though, in a song obviously made immortal by Elvis Presley but based on the Civil War song "Aura Lee," the past and the present are dramatically, and majestically, fused in a fitting coda to a journey in which two worlds merge into one--the world we know and one we know only from what's been handed down to us through the ages. Thus Waiting For the Dawn, a most engaging guide to new vistas of imaginative vitality.