By CLAUDIA LA ROCCO and GIA KOURLAS
Published: May 5, 2008

Skip to next paragraph 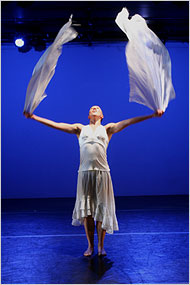 Molly Gawler of CorbinDances in a piece named for the infinity symbol.

A chief pleasure of watching people dance to music, especially live music, is the way it can make you hear differently, hear better. Savion Glover illuminated an entire rhythmic landscape within Vivaldi’s “Four Seasons” in his 2005 show “Classical Savion”; the propulsive Philip Glass score “In the Upper Room” is never more so than when it is being interpreted by go-for-broke dancers in the Twyla Tharp ballet of the same name.

So it is a happy thing that the Brooklyn Philharmonic has begun commissioning choreographers to create works to Stravinsky (though dancegoers might groan at yet another dance set to Stravinsky, especially “The Rite of Spring,” which Nicholas Leichter tackled last year for the Brooklyn ensemble). But it is a sad business to report that the second recipient, Complexions Contemporary Ballet’s co-artistic director Dwight Rhoden, does little to enliven the extremely lively “Pulcinella” score.

This is not for want of trying. Never mind the powerhouse dancer Desmond Richardson — the company’s other director and the central figure in Friday night’s first dance, “Hissy Fits” — Complexions is a company designed with shock and awe in mind. But spectacle without lyricism quickly jades the viewer, and Mr. Rhoden does not knit his lashing legs, muscular partnering and space-eating leaps into a nourishing theatrical experience. As the dancers tore through a colorful world (a nod to Christine Darch’s costumes) that evoked our celebrity-mad times, my eye kept traveling to the pit, where the singers and musicians were barely visible. Would that it could have rested there and feasted on music alone. CLAUDIA LA ROCCO

It’s tricky when a dancer as revered as Patrick Corbin, a veteran of the Paul Taylor Dance Company, branches out with a troupe of his own. An excellent dancer hardly qualifies as a great choreographer. But with Mr. Corbin’s newest program, performed by CorbinDances on Saturday at the Joyce SoHo, he shows promising signs of beating the curve.

In his new “Romantic Conversions” Mr. Corbin explores the possibilities of the port de bras. Set to Rachmaninoff, the quartet is soft in all the right places, inventive in its sweeping, pure structure, and unabashedly pretty. The dancers wear either black or white, and a black curtain stretches across the back of the stage. When the dark-clad couple retreats, there is a beautiful moment as they vanish; their bodies evaporate like mist.

The program offered less riveting dances by a present CorbinDances company member, Elizabeth DeMent, and a former member, Gregory Dolbashian. And Mr. Corbin’s own “Reach,” a work for nine set to music by Philip Glass, demonstrates a flair for moving large groups but settles into the tedious scenario of an individual pitted against the others.

Mr. Corbin’s final dance, named after the symbol for infinity and performed by Molly Gawler, pays tribute to the lighting pioneer Loie Fuller. As Ms. Gawler swirls, holding two gleaming pieces of white fabric high above her head, it’s as if she’s parting a pair of lustrous clouds. This is a trick that works. GIA KOURLAS

More Articles in Arts »
Need to know more? 50% off home delivery of The Times.

To find reference information about the words used in this article, double-click on any word, phrase or name. A new window will open with a dictionary definition or encyclopedia entry.

Madonna at the Roseland Ballroom